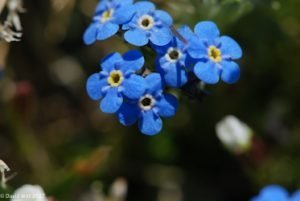 Chapter 2 Part I Historical Connections of the Anthropocene

In the mountains north of where I live, at tree line, the place above which the environment is too harsh to support the growth of trees, there are signs on a ridge trail where three paths intersect. The last spruces live there, shortened in height, branches on the southwest face of the trunks blasted away by winter winds. Higher up are alpine meadows where the snow blows off; below, the thick, dark forest traps that snow, holding it until spring. The trail’s junction is marked by two small wooden signs, one mounted above the other, giving rise to the quality of uncertainty.

They are connected by a narrow board attached with a single nail to the wrinkled grayish-white skeleton of a long dead tree. Their message, the information they were meant to convey, is missing, abraded by the wind as thoroughly as the missing spruce branches. No writing or symbol remains, nor the faintest trace of paint or metal. The signs must once have been sharply rectangular sawed lumber but now have edges weathered to rough smoothness. Their light gray color nearly matches that of the dead tree to which they are attached, the aged patina of an old growth forest that has lived here since the last ice age. Perhaps the tree still lived when the signs were posted and they grew old together. One might miss them or see past their meaning, but what appears unreadable is not necessarily without meaning.

In whatever direction you look trails divide distance into parts of time, taking longer or less long to reach a destination. These paths are vaguely recalled or are reminiscent of paths seen in other times and places, once traveled but subsequently forgotten. The very presence of the signs suggests that the trails, even if we are without knowledge of their destinations, represent a way forward.

Our recognition of generally true patterns path must be as ancient as our own existence. In written form, patterns were noted in both historic Chinese and Greek civilizations, to note just two examples. Ancient peoples were as concerned as ourselves with understanding the structure and order of nature—the unfolded whole—that directly impact individuals and entire societies. The keen observations of Lao-tzu (“The Old Master”) from around 500 B.C.E. and Chuang Chou (a.k.a. Chuang-tzu) about two centuries later acknowledge the practice of Wayfaring, akin to finding our way along actual or metaphorical mountain paths. The limitations of words describing patterns may not capture the exact underlying meaning, but are what we have to serve as our guides.

Knowing our exact speed and place along the path of a generally true pattern comes with a degree of uncertainty (something like the term used by Werner Heisenberg). The operation of right and wrong, good and bad, retains a measure of the mysterious even where the pattern seems clearly definable since, with movement, what we think we know constantly alters. The important insight from the ancients was understanding change as the central feature in nature—and thus of everything, including the relation of opposites, which is to say that a unity is found in the interaction of opposites.

Describing flow in a physical manifestation like turbulence (such as the flow of liquid through a pipe) is difficult mathematically and was not describable at all before the development of non-linear equations. For our forbearers, intuition and identification with the forces of nature were favored over rational, logical means as a way of finding nature’s flow. In an ideal state of oneness with the larger flow, no actions are taken contrary to the laws of nature. For those of us who have not yet reached this mystical state, generally true patterns could be the signs that hold significant meaning to act as guideposts.

The Greek philosopher Herakleitos was contemporary with the early Taoists. He used the term logos to suggest the natural rule of order. Logos is not the same as the Tao, but there are striking similarities. Sayings of Herakleitos such as “Knowledge is not intelligence,” and “I have heard many men talk, but none who realized that understanding is distinct from all other knowledge,” would find a sympathetic ear with Taoists. (Davenport 1976) Compare this to Chuang Chou’s “Great knowledge is broad, small knowledge is petty. Great talk is powerful, small talk is loquacious.” (Cleary 1998)

The dynamic system of paradox recognized by the Taoists also finds expression in Herakleitos: “When Homer said that he wished war might disappear from the lives of gods and men, he forgot that without opposition all things would cease to exist,” and “Opposites cooperate. The beautiful harmonies come from opposition. All things repel each other.” Contemporary systems theories of ever expanding connections have much in common with Herakleitos: “No matter how many ways you try, you cannot find a boundary to consciousness, so deep in every direction does it extend.”

Expressions of the entirety found in Taoism, logos, and contemporary physics explain nature as inherently relational. This is expressed in the generally true pattern:

No thing is one thing alone.

There must be among things reference to other things in order to derive meaning. The infinite number of things, events, and processes that make up the entirety are comprised of interconnecting relationships that go across scales of position, velocity, and time. The quality of interconnectedness is the central tenet of natural history.

Beyond the temporal existence of things, events, and processes,

The agents which individually comprise galaxies, lichens, and marriages all change. Each of these comprises an open system, open to input and dissipation of energy. The opposite is a closed system. As a theoretical construct of social systems, Gregory Bateson described its components: Rules are stable and internally consistent, the equipment used is non-evolving, the motivation of the players is unchanging, and the players interact with a steady-state environment. Such a system in reality is impossible.

Open, nonlinear physical, biological, and social systems are in every way the opposite of a closed system. Here are four examples: (1) Rules may give the appearance of momentary stability, but over time are in flux. Even in physical systems, the known (or suspected) behavior of matter and energy may not now, or in every place, be the same as it was at the beginning of time at the origin of the universe. Even if laws of physics do not change over time, our understandings of these laws do change. The rules are not fixed in our own minds, but develop in a process of continual evolution. (2) Individual agents within patterns may evolve in ways either expected or unexpected. The chemical composition of the agents may change. Agents may be perceived as waves or particles. Agents may learn and act upon what they learn, including making changes to the rules.

Systems are in interaction with other systems, unpredictable things may happen. Correct or incorrect guesses or chance occurrences may have beneficial or catastrophic outcomes. The ability to recognize the existence of a pattern, or the tendency of an agent, by chance or design, to take advantage of “lessons” learned from patterns can give that agent (a leader, for example) an advantage over others which (or who) have not recognized or have been unable to take advantage of pattern recognition. (3) Tendencies, rules, preferences, and motivations can and will change over time. (4) Experimentation, statistical testing and mathematical quantification by themselves will not describe everything about a rule-changing, unpredictable environment. However, the environment is not senseless and the unpredictable appearance of random events is often a result of the limitations of both our empirical knowledge and perhaps more importantly, of our wisdom, or at least of our willingness to make use of those patterns which are recognized.

Next essay: Chapter 2 Part II: Historical Connections of the Anthropocene