I should be used to it by now, but I remain irritated by news media attention given to celebrity antics which takes attention away from the vital issues of our time. Their abusive behavior (real or alleged) makes for popular copy. For example, comedian Jimmy Kimmel finds humor (and an audience) in an ongoing YouTube series, “I Told My Kids I Ate All Their Halloween Candy.” Parents are told by the TV star to steal candy from a baby. They then joyfully participate in the psychological abuse of their own children. Aldous Huxley and George Orwell wrote about these people a couple of generations ago. Presumably, the abusive parents watch late night TV rather than engage in late night reading.

I recall Bill Cosby from early comedy records and I Spy. He is known to younger generations for a sitcom and cartoons, Ford car commercials, commitment to youth education and the tragic death of his son. He became a vocal moralist lecturing us on use of foul language and bad behavior in general. It is important to have someone to remind us of these things. A recent biography claims that his reach was such that he made America ready for a black president. Was he, however, at some point tempted by his considerable power to assault the powerless?

Cosby’s attorney (although not the actor himself) denies the allegations against him. Kimmel would almost certainly deny that his antics are harmful to children. These offerings are symptomatic of a larger culture of humiliation. In reality TV (including celebrity scandals) participants willingly do stupid or absurd things; viewers participate in their own humiliation by agreeing to watch.

IF ONLY the abuse and humiliation of wild nature garnered similar coverage by the media and the same attention by listeners and viewers. Canadian caribou starve when icy rain rather than soft snow covers the lichens they eat. All wildlife is disappearing from Tibet because the Chinese occupiers don’t have the same respect for nature as the original Buddhist inhabitants. Where is the outrage? The wild animal victims can’t do interviews. We can look away from pictures of starving hoofed creatures while from Tibet we get almost no pictures at all thanks to government censors. Not that American media is likely to give more than passing notice to such issues even when images are available.

The humiliation visited upon abused women and children is not unlike that meted upon the earth’s harmless wild creatures on a daily basis. It is easy to abuse that which we devalue. As to the devalued themselves? The abused children of the Kimmel world perhaps will grow up to take out their repressed anger on the earth itself by becoming executives in coal, oil and natural gas companies.

California taxpayers are paying these professors. They should ask for their money back.

Getting beyond the sheer silliness here (criticizing Muir for his ethnic heritage and accusing him of stealing native lands) there is a much darker side to this. Let’s start with the false premise that contemporary environmentalism must be based on urban nature vs. wild nature (big wilderness). According to the experts, environmentalists can only support one or the other.

That premise has already been debunked by the concept of “climate justice” notably promoted by Naomi Klein in This Changes Everything, Capitalism vs. the Climate. The livelihood and quality of life of the urban masses (and scattered rural population), including employment and pollution issues, can be enhanced by replacing carbon energy with renewable energy. Wilderness is a part of this: protecting our largest wilderness area, the sky, is in everyone’s interest. Protecting the wilderness polar regions from global heating is also in all our interests. The false dichotomy posited between whites and non-whites is nonsense. We are all subject to the same atmosphere.

The scholars claim that urban populations may have a greater interest in parks nearer to home than in those more distant. This is true in as much as it is easier to get to somewhere closer by than farther away. I live on a mountainside in New Mexico. I hike there more often than in Yosemite. But it doesn’t follow that therefore I don’t or shouldn’t care about Yosemite. Environmentalists must work with equal determination to care for both wilderness and urban natural environments—it’s all connected! And who do you think worked harder than anyone else to prove that connection: John Muir.

The article also claimed that a professor of geography supported the anti-Muir position, although he was not directly quoted. Here is a biology lesson that relates to geography. Wild nature and big wilderness provide free services to those of us who live in or near cities and towns. Let us start with air purification. All those lovely plants in wilderness areas (including diatoms in the ocean) are busily capturing carbon and exhaling oxygen. And then there is the matter of water filtered and stored in wilderness areas. Water does not come from a tap any more than food comes from a grocery store. The scholars presumably confuse delivery with generative systems.

The anti-Muir forces fit in with the larger neoliberal/conservative/reactionary political movement that is gaining strength from Sweden to England to China to Russia to the U.S. This ideology holds that nature must be subservient to the economic desires of human society. (Many American political “liberals” also believe this.) Muir showed us that our success in the world must be in accord with the laws of nature. In our time, economic prosperity and the continued existence of wild nature are as absolutely linked.

I wish that I could attend the anti-Muir gathering at UCLA (mentioned in the article) to take on the neoliberals and their destructive, nonsensical politics.

We need Muir more than ever. 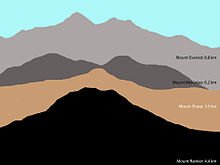 If the elevation of a mountain is determined by measuring from sea level, and then sea level rises, has the mountain become shorter?

Example of things going right: U.S. Finds One Place Not To Drill for Oil in Colorado

“We’re all going to die.” But one of them might want to do so after reading the Intergovermental Panel on Climate Change Fifth Assessment Report (AR5).

“Human influence on the climate system is clear, and recent anthropogenic emissions of greenhouse gases are the highest in history. Recent climate changes have had widespread impacts on human and natural systems.”

“Warming of the climate system is unequivocal, and since the 1950s, many of the observed changes are unprecedented over decades to millennia. The atmosphere and ocean have warmed, the amounts of snow and ice have diminished, and sea level has risen.”

“Each of the last three decades has been successively warmer at the Earth’s surface than any preceding decade since 1850. The period from 1983 to 2012 was likely the warmest 30-year period of the last 1400 years in the Northern Hemisphere.”

“Anthropogenic greenhouse gas emissions have increased since the pre-industrial era, driven largely by economic and population growth, and are now higher than ever. This has led to atmospheric concentrations of carbon dioxide, methane and nitrous oxide that are unprecedented in at least the last 800,000 years. Their effects, together with those of other anthropogenic drivers, have been detected throughout the climate system and are extremely likely to have been the dominant cause of the observed warming since the mid-20th century.”

“Limiting climate change would require substantial and sustained reductions in greenhouse gas emissions which, together with adaptation, can limit climate change risks.”

It goes on like this page after page, but it is this last statement that hurts the most. To avoid catastrophe for us and our fellow creatures the message is: we must stop the carbon addition immediately. Ban Ki-moon, General Secretary General of the United Nations, attending the unveiling of the report in Copenhagen, made the sobering statement that the carbon addition must end by the end of the century. But the report itself suggests that the Secretary’s timetable may not be fast enough. Leaving behind our current lifestyle in the next decade or so while denying that lifestyle to developing countries will be among the most momentous challenges ever faced by civilization.

I would like to provide a list of world leaders who are up to the challenge. But instead I am going to take the dogs on a hike, hoping that this problem will have resolved itself by the time I get back.