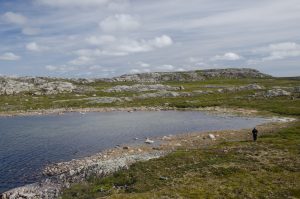 {In late July and early August I led an expedition to Aylmer Lake in the Canadian Arctic. We were following part of the route taken by Ernest Thompson Seton and his expedition of 1907. Field notes from the expedition can be found at my Seton website. This essay and others were first published by the expedition’s sponsor, the Academy for the Love of Learning, at the Seton Expedition website.}
When we are faced with the question of how to interpret a new place, what standards of measurement do we use to come to terms with it? In the case of Aylmer Lake this includes consideration of physical dimensions.

Aylmer Lake roughly takes the form of an inverted, although with islands, headlands, etc., lines of sight are not straight. That is, Aylmer is not a single balloon shape, but a complex series of shapes. Keeping that in mind, taking a trip from the north end (Sandhill Bay) to its unnamed south would require a journey of at least 37 miles (60k), although probably longer to account for points, narrows, shallows, etc. The same approximate distance would take you from the east (Thanakoie Narrows) to west (Lockhart River).

The maximum depth of the lake has not been measured, so that remains unknown. Its elevation is 241’ (366m). Its surface area when full (it’s a bit low at the moment) is over 327 sq. mi (827km/2). The longest straight-line distance I could measure was 30 miles (49k). At the place where the inverted is at its widest, the nearest land is over 3 miles (5k) distant. Water temperature is higher in the bays than in the main body, above freezing, but very cold by my standards.

Imagine the Seton expedition coming paddling through by canoe in 1907 without a clear idea of their progress, which is to say that could not have known where they were or what they might find. No GPS. No rescue planes. All very dangerous compared to our time. Aylmer is not even the largest lake of several around here.

All of which tells us about geography, but does not give insight into meaning. So what other standards of measurement might we apply?

I would measure wind, both natural (headwinds, tailwinds, sidewinds) and the force created by the canoe itself when it is underway. Also consider waves coming fore, aft, and broadside, some big enough to swamp a canoe or a motorized 16’ (4.8m) aluminum fishing boat.

And then there is depth: easily down as much as 400’ (122m) and up to infinity, a constant conscious presence in the wildness. I would add to this the scale of quiet: no motorized or electronic noises, no people, just nature as pristine at Aylmer in 1907 as it was a thousand years earlier. Or ten thousand. There was for them over months of travel a scale of loneliness, far from friends, family, the familiar environment of usual living.

That leads we to the creation of a final most important scale, that of absence. The absence scale is determined as a compilation of all the others – time, distance, area, wind, water, and life as it was once known before this trip. The absence of safety, of people, of familiarity was for the Seton group very high. The absence of any these can also take place in the most crowded city, and maybe there it is worse.

Here in the wilderness absence is felt on a subscale ranging from anxiety to relief. Absence can be terrifying liberating. The meaning of a journey such as the one to Aylmer comes out of where we may be positioned on that scale of measurement. 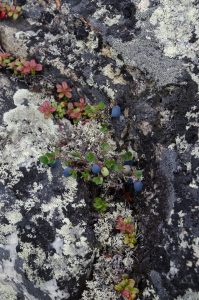 Land and water. Burned forests and ice floes. Endless shore-lines, tiny birds. Mosquitoes, mosquito head nets. Grizzly shattering glass and lunging through a cabin door, grizzly shot dead. A vast bay of the lake, a tiny canoe touching the water-shore horizon line on the other side. This last view, a wolf’s eye view as it might have beheld Seton and Preble on their visit 108 years ago when they met the wind silence of Aylmer Lake.

In 2014 the Northwest Territories experienced, at the same time, its coldest and driest summer in memory. One could have seen from the frozen shores of Aylmer Lake in the third week of July the smoke of unprecedented and ruinous fires in the Boreal forest 90 miles south. This year warmer, with the major fires still to come.

The late summer of Seton’s visit to the lake may have been a cold one; there was no mention of fires; it was certainly storm-ridden, gray-clouded over desolate shore, but also with the tundra’s reddish carpet of grasses, specs of wildflower yellows and blues, the last white remnants of cotton grass. Here on a windy day the human voice is washed away as thoroughly as the clear water wave cleaning the sculpted shoreline rocks.

Of all these contrasts, the one I find particularly interesting is that of talk, no talk. For the four men on that long 1907 trip, endlessly paddling every day week after week (except when in even closer quarters when storm-bound) I imagine there was limited talk. What else could have been left to say after such a long time together? What might have the two white men and two Indians to say to one another that could possibly have been interesting to the others?

I believe they must have gone through long periods when their thoughts were accompanied by nothing beyond the natural silence of a land of contrasts.