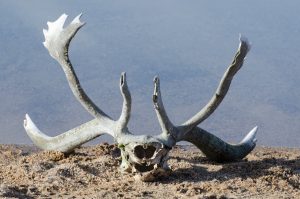 Five blue tents are illuminated warm in the sunshine on the remote beach in northern Canada as earlier they had shown through moonlight of the night passed. Or of what constitutes night at 64° North Latitude on August 2nd. The sun sets, then the light briefly transitions to twilight before the coming of dawn again brings the full light of day to Aylmer Lake.

Hours of wind-stillness have calmed a lake so that it reflects the detail of clouds, outboard motors and Cottongrass along the shore. Nothing seems to move on the ground, although time has moved on, this is a new day. There has taken place a passage. How do we go about perceiving it?

First look to the record of the sand. There is the faint presence of Musk Ox tracks, already old. There is a recent record of a Caribou’s oddly shaped track passing west to east on the wet beach; overlaid on that is the subsequent track of an Arctic Wolf passing in the same direction. The most recent track is the huge paw prints of a Barrenland’s Grizzly, this in the dry sand, so it is indistinct. That track in the sand ends in two furrowed sand ridges, a roughly shaped: ( ) with the left part of the parenthesis no more than half the size of the right. This shape suggests that two bodies lay here hours earlier or a day earlier, sow and cub. Immediately to one side are two blueberry infused scat piles, one larger than the other.

The beach sand recorder of wildlife activity is immediately compromised by our presence, marred with an overlay of human footprints. We searched the beach for any sign of danger (i.e., bears) then looked for a temporary tent home sites, then unloaded cargo of food containers, cameras, sleeping bags and such other stuff as seems needed here for a couple of nights. Within a day the number of our imprints seem the result of hundreds of visitor’s restless pacing, although we number just five. The wild ones pass by in a single line and then are gone on. We, relentless, march back and forth grinding nature beneath our feet into ever smaller bits.

Next look to the passage of waves. The lake sleeps for now, glassy calm, but sometimes it rises and washes the beach free of the imprints of those already come and gone since the last storm. The moccasined feet of ancient Indians left impressions that must seem very careful compared to the brutal force of hiking boots. Generations of wolves have stalked generations of caribou. We know this because the wolves left behind, hidden in the short willow scrub beyond reach of waves, bones still white or if old enough, mossy. On this morning there are no new wildlife tracks overlaid on our own. No nocturnal grizzly visit, so we are at ease at breakfast. In a day or a week, or soon, waves will come to erase all that has happened here this past week since the last storm.

This place is not often visited by our kind. There were four known expeditions on this beach between 1832 and 1907, plus an unknown number of indigenous tribal visitors before and since. The earliest of these may have arrived several thousand years ago. Archaeologists made surveys here in 1951 and 1982. Diamond prospectors (mining is a major industry up here) have likely walked this shore in search of treasure.

There are five in our party, arrived in two 16’ aluminum fishing boats powered by 30hp Evenrude outboard motors, looking for the treasure of knowledge. I can sit on the sand watching outward toward the water for birds or lean against the boat and watch inland for oncoming bears. Passages may occur behind my back either way.

A mother Mallard Duck appears leading her band of ten little ones out of their Cottongrass refuge and into the deeper water just offshore. They swim with startling speed. I would not have noticed them at all except for a sudden excited fluttering of the entire group for reason unknown to me. They continue to the farther end of the beach out of our way.

Still water marked duck passage, closing behind. Fish surfacing or insects flailing wings show passages of another kind, although for only an instant before non-stormed water returns to its almost glass surface.

Beach tracks by whatever kind of creature will also be eroded by wind, one grain at a time toppled into the crater created by claw or pad or hoof or boot.

One other form of passage is absent in this season but evident as the dominant force at other times: Ice rules here seasonally. Winter ice will encroach upon the beach leaving its own mark by scraping away everything although there will be tracks in the snow for a moment. Glacial ice has in the past and will in the future, as Seton observed, churn the land itself, reorganizing (or eliminating) this beach as well as the lakes, rivers and hills of the north into a new form. Plants will be crushed, animals forced to migrate elsewhere.

The forty-meter hill north of the beach is a sand esker created by a glacier, a place of mounded ground-up rock. On its summit ancient people erected temporary shelter of caribou hide tents held up by poles. They tore rocks from the esker surface to hold down the tent edges, insuring their survival for another night during the long marches across the tundra in the hunt for Caribou. The resulting stone rings, averaging 4.5 meters in diameter, number as many as ten, several still easily discernable, others leaving only faint trace, as the malleable surface of the sandy esker shifts gradually reclaiming its component parts. The rocks are covered with black lichen, a slow growing organism that does not do well with disturbances. Which is to say that the rocks have to remain stable for a long time to support much lichen growth. The passage of the native hunters is long past, but remembered by the stones.

When Seton and his party arrived 108 years ago this month they borrowed (or reused) stones left by the ancient natives, taking several from two adjoining rings, building a cairn-monument to their own fleeting presence. Documented in a photograph as still standing thirty years ago, we found the cairn toppled by another of nature’s irresistible forces, the rodent. In this case, specifically, the “sic-sic” (as it is known locally), Spermophilus parryi, the Arctic Ground Squirrel. This small creature (about the size of a prairie dog but with a long tail) makes its home in burrows. Perhaps understanding the advantage of the protection of a stone castle, the squirrels built their dwelling beneath Seton’s cairn, eventually undermining the pile of ancient tent stones, altering the historical record just as Seton did when he removed them from their ancient rings. (Rodent revenge: Seton’ fellow traveler, Preble, killed several of them to take back as specimens to the Smithsonian.)

Someday the ice sheets will return erasing everything and beginning the cycle again.