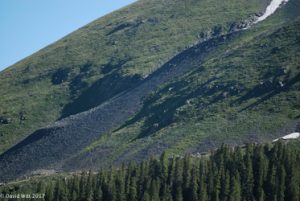 Generally True Patterns: A New Natural History of Recognizing  Ourselves as a Part of Nature

The long series of defeats for the environmentalist cause stems from accepting a debate based on loss-thinking. By altering our perception from one of loss to one of increasing inclusion, the acceptance of a person/nature connection gathers meaning. In loss terms, the environment is reduced to a commodity, sets of objects with economic value, at risk of being too valuable to keep, too worthless to keep, or priced just right to exploit, consume, or transform into something else. The desperate truth about environmental preservation is that each time we lose anything from a wild place to a baobab tree, it is lost forever; each time we preserve a place, it is temporary, its security no better than our willingness to fight the next assault. All acts of preservation are at risk of loss; all wild things lost are gone irreversibly. In every instance of deciding to preserve or deciding to destroy, change comes to the larger system with attendant consequences. Acts which lead to the preservation or destruction of relationships with nature, with the economy, with our organizations and associations, with one another, are examples of specific separateness within the social realm and part of the generally true pattern that actions have consequences.

By often choosing to fight their battles on the loss-dimension of economic turf, environmentalists continue to lose literal ground. Managerial/bureaucratic environmentalism with its cost-benefit analysis reduces environmental issues to statistics for both the forces of preservation and the forces of destruction. Loss measurement is found in environmental impact statements, calculations of visitor days, motel and campground occupancy rates, and camping equipment sales. To fund their activities, some environmental preservation organizations push sales of outdoor clothing, camping supplies, and eco-tourism sending the inadvertent or advertent message that the consumers’ environment has become more important than the natural environment.

When government agencies plan the future of wilderness areas under mandates with titles such as “Limits of Acceptable Change,” accepted is the thesis that deliberate damage will be done to the “resource.” It begs the question of acceptable to whom or acceptable to what? What level of ski run length, width, and slope is acceptable to the riparian habitat below from the standpoint of the habitat itself? By removing meaning from the environmental debate and instead arguing over the usefulness of resources, both environmentalists and their opponents have contrived nature as an objectified and materialistic thing which can (and must) be exploited. Beauty itself can be a commodity. Environmental organizations sometimes trade less valuable lands for more valuable lands. This implies that some lands are non-valuable enough that they can be trashed in favor of higher standard property (usually, more “beautiful” land). Increasing exclusion is a political necessity when we accept loss as the measure of the person/nature split.

Academics have too often separated the physical consequences of climate change and mass species extinction from the moral consequences, hiding behind the call for ever more data collection before taking a position. Observational naturalists (Ernest Thompson Seton, John Muir, and their literary descendants such as Edward Abbey) have taken a more courageous stand, emphasizing the moral lessons to be learned from nature and our relationship to the natural world. The supposed dispassionate neutrality of the quantification and analysis data collectors is not neutral at all since not taking a stand always supports someone’s position. At the very least, as Sir Thomas Moore reputedly said, silence is consent.

An attitude of respect and reverence for the wild and natural is held as politically and economically aberrant in a civilization that favors exclusion over inclusion. Critics of environmentalism claim that it looks exclusively to the past, or more precisely, to the imagined idyllic conditions of the past at the expense of current prosperity. Actually, the philosophy of inclusion looks ahead by considering how current behaviors impact future outcomes. When we accept that what we do has consequences, then responsibility for those outcomes must be borne by governments, corporations, and most importantly, individuals. We can destroy that which we pretend to perceive as separate from ourselves, but upon rational acceptance of the person/nature connection (as demonstrated by generally true patterns) destroying the world we know for short term economic gain (only for the few) is the height of madness.

Those who perpetrate destruction, or who passively support it, drink the same water and breathe the same air. Two of our greatest observers of nature, the painter Thomas Cole and the writer James Fenimore Cooper, thought extensively about both connection and loss. In The Last of the Mohicans, the White frontiersman Hawk-eye, who reveres nature as much as the Indians with whom he lives and whose ways he has adopted as his own, observes, “Nature is sadly abused by man, when he once gets the mastery.” His antagonist, Maqua, the Indian who has adapted the worse lessons of European savagery and betrayal into his own bleak heart, says of the alien culture, “His gluttony makes him sick. God gave him enough, and yet he wants all. Such are the pale faces.” These are the finest literary statements of disconnection from nature.

In his paintings, Cole showed the Whites clearly as visitors to the edge of the wilderness where they stand out in their clothing, their tools and their homesteads, seemingly tenuous, but actually irresistible to the wild-nature they conquer. His Indians on the other hand, blend in to their wild surroundings as part of a larger visual pattern. Cooper and Cole were contemporaries living at a time when the rise of the American empire and the dominance of technology over wild-nature began to appear inevitable. The disconnection from nature that concerned both Cooper and Cole has continued as a theme for creative thinkers from later 19th century writers like Henry David Thoreau and Herman Melville to contemporary science writers like Rachel Carson and Edwin O. Wilson.

In our time it is the dominance of wild-nature over technology that is inevitable. The wild-nature that we most cherish, that of tigers and untrammeled wilderness may not survive our onslaught, but bacterium, viruses, and larger small things will thrive endlessly. A future based on conscious loss is just that, a chosen direction on a small-minded path, not an inevitable one. There is an alternative: we could subject the decisions we make to the laws of nature in such a way that we live and thrive in accordance with this larger path. This mostly has to do with how we organize how we think and how we use language to express those thoughts. Knowledge arranged according to increasing inclusion rather than increasing exclusion leads us to a different place.

A final thought about loss: At least from the turn of this century, the state of Alaska has seen exceptional shifts in its climate as permafrost melts and fires ravage the land. A news report I heard about that state raised more questions than it answered: “In Alaska, which has been hard hit by wildfires, over two million acres of land have been lost.” Did that land really go somewhere, misplaced and beyond our finding? Or was the news report unconsciously making a deeper point? With the burning of ancient forests, an ancestral touchstone to our own distant past diminishes. The loss was not one of land, but one of meaning.

There really is no cure for a broken heart.