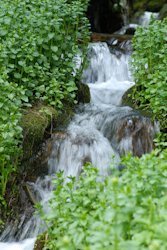 Generally True Patterns by Chapter (what it all comes to)

I am aware of the complexity of my argument, and of the shortcomings inherent in its formal presentation as a philosophical thought problem. John Muir, Ernest Thompson Seton, Aldo Leopold, and Loren Eisley (more examples might be given) have made exactly the same points with an eloquence of beauty I can more admire than emulate. In my defense, I can only claim that each of must contribute what we can under the dire circumstances in which we find ourselves.

As I know from my studies of art history, the greatest and most original artists, no matter how radical their innovations, have built their accomplishments on what they learned from those preceding them. In this final section I offer first a restating in one place of the generally true patterns I have identified, followed by a glossary of terms I have introduced (I hope in the name of clarity), and a list of some of the more influential authors (but by no means all the authors) whose works I have called upon to support my structuring of the three realm examples that forms the model for generally true patterns.

1) Nature is characterized by generally true patterns: things, events, and processes that work in the same way across physical, biological, and social systems. An overriding pattern is that all actions have consequences. This implies that what we do in the world matters, yet too often our behavior is contrary to this pattern.

3) In any situation, as energy dissipates, the very occurrence of that dissipation creates disruptions. Energy moves through all systems. Instability within a system leads to change.

4) Everywhere we look in nature, we find a primacy of change. All situations of things, events, processes, and organizations exhibit motion and change. There is no situation of unchanging condition.

5) In trying to find meaning, we must look at relationships and the entirety. Change compounds change. Each emergent state includes the properties of the previous stages. As things, events, and processes evolve, so also all the relationships among them.

6) Patterns describe potential, generally rather than precisely. All agents within all systems operate with some degree of imprecision. All systems change and evolve over time. All systems of the three realms are ultimately, even if distantly, connected to all other systems. A functional system is one in which the inflow of energy is sufficient to maintain its operations. The vitality of any system depends on the free flow of information. As organizations (social, biological, physical) increase in size and complexity, differentiation occurs. Information (or energy) does not move in a vacuum but through an already occupied space. Information exhibits the quality of continuance over time. All production is associated with certain costs.

Major changes in a system can come suddenly. A change in the environment of an area will be accompanied by a change in the population of that environment. Reciprocity is inevitable. Systems must be built through the necessary developmental stages. Evolution is a constant in nature. Longevity is subject to limitations. Agents, acting separately or collectively, claim a portion of physical space as their own. The closer a system gets to equilibrium, the less resilient it becomes to any changes in the environment; All systems are dynamic and evolving or in stasis and dying. Change compounds.

Systems follow natural processes of renewal to maintain themselves, including the ability to evolve into a different form. Aspects of existence are a collection of malleable properties rather than a set singularity. Energy moves through all systems. Structures of organization are systems of signals expressed in the form of energy, matter, and information in physical and cognitive systems. Organizational structures adapt to fit needs (or events or situations) as need arises.

An alteration or change in an agent or entity can send permutations through a system. Systems develop where movement of energy pushes the system to the edge of chaos, the place where creativity and adaptation to changing conditions takes place. Diminishment of energy into a system leads the organizational structure to resemble a closed system. A net gain of energy input is needed to maintain any system over time without running down.

7) Wild-nature pattern lessons are about transformation, including loss. Systems follow natural processes of change to maintain or transform into a different form. Aspects of existence are a collection of malleable properties rather than a set singularity.

8) We and everything are connected.

Glossary of Terms and Concepts Related to Generally True Patterns

Conscious loss: the policy to diminish, extirpate, or eliminate something.

Forms of conversion: processes whereby the movement of energy restructures a system into a new form.

Generally true patterns: things, events, and processes that work in the same way across physical, biological, and social systems.

Increasing inclusion: the idea of changing, compounding relationship over time.

Potential: the enfolded form of a generally true pattern that exists across the three realms.

Principal: parts of the entirety that are more inclusive of other parts, e.g., consciousness; the more principal parts are more dependent on other parts.

Realized: the unfolded form of a pattern manifested as a specific thing, process, or event in just one realm which, connected to related instances in other realms, comprises a generally true pattern; an individuality may also be termed an example of specific separateness.

Static constancy: a belief holding that things, events, and processes exist largely outside of time and are for all practical purposes, changeless.

Three realms: Our universe consists of three realms accessible by sensory means: the physical realm represented by the reductive sciences of physics and chemistry that includes classical mechanics, quantum mechanics, and relativity. The second is the biological realm of all living things organized on an ecological model. The third is a special case of the second, basically, us, called by various names, but summarized as the social realm.

A conventional bibliography is not useful here since the literature on subjects covered is overwhelmingly vast. I will limit source citing to authors specifically mentioned in the text.

Cleary, Thomas (trans. And ed.). The Essential Tao: An Initiation into the Heart of Taoism Through the Authentic Tao Te Ching and the Inner Teachings of Chuang-tzu.Edison: Castle Books, 1998.

Cooper, James Fenimore. The Last of the Mohicans, (1826) in The Leatherstocking Tales, Vol. I. New York: Library of America.

Lovejoy, Arthur O. The Great Chain of Being: A Study of the History of an Idea.Cambridge: Harvard University Press, 1936, 1964.

Prigogine, Ilya. The End of Certainty, Time, Chaos, and the New Laws of Nature.New York: The Free Press, 1996.

Roszak, Theodore. The Voice of the Earth, An Exploration of Ecopsychology.New York: Touchstone, 1992

This ends the 22 part series on Generally True Patterns