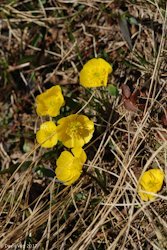 Chapter 4 Part I Connection and Separation

On the prairie, as elsewhere, everything starts with the sun, but it is grass that first captures the imagination, grass which lives in a kind of symbiosis with fire. Tall grass rattles together like the sticks of wooden chimes suspended from porch eves. It is a mass of interwoven stems which, except when burned off, grazed down, or defoliated, intercept even the hardest rain, transforming its harsh impact to a gentle slide along ramps into the soil. Wind-blown grass forms troughs and crests so that the prairie sea appears light green when seen with the wind and dark green when the wind makes it bow towards us. The prairie turns from a photosynthesizing life color in spring to reddish-dun as summer passes; it changes to red-copper in wet gray autumns, then to blanched straw in winter, seemingly dull or glowing depending upon clouds and the angle of diffused or direct light escaping from above. At the end of winter, fires cause the above-ground parts of the plants to wither into ash. Briefly, the land itself becomes black.

Fires gold-rim the night hills in convex semi-circles of neon crowns. In the day, grass smoke from prairie fires can rise in fast thermal columns enveloping a passing cumulous cloud, a wispy gray embrace of white mass. Below, drifts of black ash pile against revealed sharp fragments of flinty rocks hidden beneath the grass at other times. Rains will turn the land to dirt brown again without the danger of erosion. The greatest extent and biomass of grass lies beneath the surface where each plant may have roots cumulatively miles in length. The boundary of the prairie is somewhere between deep in the earth and far up into the sky; it extends into eastern forests and western deserts, with a linage going back over ten million years. Its sod lay unbroken since the last ice age until ravaged by machines.

The boundaries of a plant or an ecosystem or a solar system are less subject to physical proof regarding its proposed extent than to the system of imagination we impose in the seeking of definition. There is first the physical problem of defining where a grass plant begins or ends. Does it start with sub-atomic properties? Does it end at the tip of the blade, or with the blades of its distant kindred, or does it end with the visual termination of the prairie aggregate, at the gash of a road or the sweep of a river bend? Even if those questions could be answered, the boundary of a plant or a prairie or of the thermodynamic forces at work in the creation and maintenance of that system are in constant flux—as is the way we imagine that plant or prairie to exist in the world.

When I lived in the Flint Hills of Kansas, I would follow the fires across ranch land. Fires have been purposefully set by humans from the time before the entry of the Europeans to the present. The prairie as it has evolved over the past several thousand years is a human/grass ecosystem. Burning off dry grass releases nutrients back into the soil and despoils the above-ground portions of old dead growth so that new growth can take advantage of maximum sunlight. The blackness behind the fire is just grass ash; the ground does not change color except by what overlays it at a given moment. The passing wall of fire, even where it flares up to many times my height, is often thin, in one place the length of my hand, in another about three paces across. There are brief moments when it flashes forward, wind-driven. Walking close behind the fire is not dangerous when the wind is not threatening, for it cannot turn back upon itself in places where the fuel has already burned. The ground remains warm behind the fire path, but burned grass leaves no hot embers. Whitish rocks show an oily brownish cast from plant resins, but stay hot for only two paces behind the just-passed flames of a slow moving fire, thereafter quickly cooling. Broad-leaved shrubs may survive the fires if they have received enough moisture. Cow dung (it used to be bison) continues to smolder after fire passes over, casting out thousands of little smokes from the black expanse. When a tree succumbs, a miniature fire may range inside its walls for hours afterwards.

Ashes crumble to the slightest touch. A strong wind will sort out the ash, sift it from piled to flat so that within a day or two the blackness will start to diminish. Winter wheat fields, riparian shores and deep thickets of sumac are unaffected by the passing firestorm, although white smoke crept through those places with choking force while the fire raged. Every curve of hill and all wheel ruts and previously hidden rodent trails show graphically after the fire, transforming the landscape to a vulnerable nakedness in which meadowlarks and crows and killdeer and coyotes hunt for the charred bodies of insects and rodents or the live survivors with nowhere to hide.

Within a few days wildflowers show everywhere as life rises from the ashes; the life/ash ecotone is a continuum and not one of separate components. Within a week, coffee brown earth will be tinged with green, and in two weeks the land will become recognizable prairie once more. In a month, the tall-grass prairie will be fully restored. It was once like this over much of the North American continent. Except for parts of the Flint Hills in Kansas, the Sand Hills in Nebraska, parts of the Dakotas, and lesser remnants of unbroken sod elsewhere, the original ecosystems of the prairie are largely destroyed. The remnants keep to their fire and rain rituals, growing in spring, decaying back to visually simpler form in the off-season, waiting for us to leave, to reclaim the overgrazed pastures and the wheat fields, to cover and protect the land again when we are gone.

The prairie, a story of fire, is one specific example of a generally true pattern:

There is no situation of un-change.

Identifying generally true patterns is a means of making sense of non-linear processes. Coming to a deeper understanding of processes, rather than prediction of specific outcomes, is the goal of pattern recognition. Physical occurrences such as fire force change on life systems in a way that is sensible in the aggregate while much less knowable in the outcomes for individual lives. The lessons of prairie fire ecology present a model of interconnectedness. Our more common approach of fragmenting problems into manageable bits can be a useful illusion particularly in technical matters of science and engineering. But separation, as a thing itself, has its limits as shown by the impossible task of determining the boundary of even a single prairie grass plant.

If the perception of separation creates separation, then it may be equally possible that the perception of connectedness could create connectedness. Pattern recognition presents a way to imagine connectedness in a meaningful way. The person/nature split is an outcome of a belief in certainty. When beliefs are assigned permanent true/false values, they lead us to a static view of nature and society, thus becoming a limiting factor on thought and a self-perpetuating mechanism keeping our knowledge in a fragmented state. Were language to allow, the perception of holistic reality would create a holistic response. There is no one way to look at realities, but many ways to look at one reality. There is no arrival at absolute truth (through science or any other means), but there are insights changing over time that give us a way into understanding the nature of knowledge and experience.