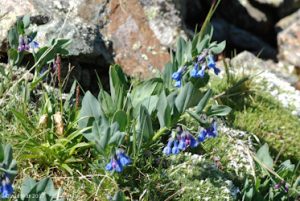 There is an undeniable interrelatedness of subatomic forces, ecology, politics, spirituality, and romantic intimacy as realized specific examples of the larger potential of patterns. Pattern recognition calls for a denial of the tendency to assign each quality of nature a status of absolute separateness. This is not to be confused with identifications of specific separateness, for instance the morphology (form and structure) and taxonomy (genetic relationships) of plants and animals. Identification of something as one thing is a major preoccupation of scientists and those like me who make brief forays into their world.

Coming down a ridge in the high country spruce forest just below tree line, I see a moving shadow, but it is such a small thing that perhaps it is not precisely the sight of something, but more a sense of the presence of motion. As any wild thing would when confronted with the mysterious, I freeze in mid-step awaiting additional signals. I scan a rock field ahead, an inlay of small boulders on a steep slope mostly shaded by the trees. At the nearest edge of rocks, just ahead, I again get the impression of a flicker of movement, but this time not of shadow but of diminutive substance.

The tiny head and shoulders gradually resolve themselves connecting to a sleek body and narrow tail. The reductionist part of my mentality engages memories of classification schemes: Flesh-eating predator, Order: Carnivora. Furbearer, Family: Mustelidae, generally characterized by short legs, rounded ears. Then, in contravention to the inner wildlife biologist, the naturalist emerges as well: this group of animals is generally perceived as aesthetically pleasing to those of us who do the classifications. The family includes minks and skunks, but this is a miniature predator, Genus: Mustela, or weasel. Later, in reviewing my field notes, I find that I have tentatively identified this one as Mustela erminea(Ermine or Shorttail weasel) with “reddish top, cream bottom.” An Ermine is whiter on the ventral while Mustela frenata(Longtail weasel) is more yellowish. Frenataof the same sex is marginally larger, but what sex and what age is this one? And what is marginally? They are all small. As to tail length, I didn’t get a good enough look at the tail to know for sure.

This Mustela of whatever persuasion has no problem sighting me and after a moment’s peering and consideration from the vantage point of its rock, vanishes. It is simply gone from one second to the next while my brain has not registered the progress of its disappearance. This is not unique; an entire herd of elk can fade into deep brush even as we watch and then be gone as thoroughly as if they never existed. This feat is even more easily accomplished by a creature I could easily hold with one hand and nearly enfold with two. I climb across unstable rocks to reach the place once occupied by the creature. There is a deep hole into which it apparently has dropped. Above, on cloudless day, the sun has passed through mid-afternoon almost to the moment where its rays will noticeably angle. For now, all the upper world is in a state of bright luminosity making the blackness of the hole all the more exceptional. I lie down on the rocks and push my face to the edge of that blackness trying not to cast further shadow upon the entry into the miniature cave.

The weasel looks back at me, I suppose with equal curiosity. Like other predators, they are seemingly fascinated by what goes on around them, including the highly unfamiliar. In this remote place, far from any trail, it is possible that this one has never before beheld a creature of my kind. An occurrence of optical physics works to my advantage. A narrow beam of light at the same angle as the tunnel shines in just enough that, while it gives no illumination of the rocky dimensions, shines directly into the eyes of the weasel like that of car headlights reflecting from the eyes of an animal on a night road. Its eyes glow like silvery metallic turquoise beads, a description that must do although it is far from the mark.

A physicist might gauge the frequency of this reflected light to determine its place on the light spectrum; a biologist could kill the weasel, then pluck out its eyes to count the rods and cones and pigment fragments concluding with a check of its mammae, teeth, and of course, length and ventral coloration. But as I encounter this elegant being, I am seeing an order of a different kind, a reflected color from the eye that I have never seen in nature or art. I will be forever haunted by the moment. Those eyes are made of atoms from suns so long ago exploded and dispersed through the galaxy that even the broadest use of our imaginations can scarcely cope with the time and distance. The way we choose to order things in relation to other things is the key to how we perceive the three realms.

The way we order our knowledge of nature (relationships within the entirety) tells everything about us. How we do so is generally predictive of how we will treat one another and all other agents of the environment of which we are a part. Our resistance to accepting that energy input into a system leads to motion and instability, and that it thus means change, is severe. Perhaps this is because major change suggests literal death or at least metaphoric death of our ideas and ideology. Even when it is accepted, it can be melancholic as in Tennyson:

And slowly answer’d Arthur from the barge:

‘The old order changeth, yielding place to the new.’

Our continual attempts to deny a connection to something larger than ourselves are a form of resistance to the lessons of the generally true patterns. The patterns suggest a person/nature connection; we are in relation to all else with no possibility of being alone. But the way we live now, practicing the way of the person/nature split, places us in a kind of afterlife, something like the ancient Greek shades (ghosts or souls) of hell who live within observation distance of nature and at the same time beyond touch or understanding of it.

Then as now, the truthfulness of those who wield power can be tested: the more they conjure fear and enjoin hatred in their followers, the more likely they are to be liars who say what they do to gain control over others by a call to person/person separation or person/nature separation. Negativism is made easy to buy into because of our broad scale disconnection from the other two realms. The belief in separateness itself makes the potential order of the generally true patterns invisible. We have become shades by choice rather than by death. The massive violence inflicted by peoples upon one another and against nature must arise from our beliefs, or to put it another way, from our disbelief in the order of connection.

Next essay: Chapter 5 Part II The Order of Connection/The Connection of Order