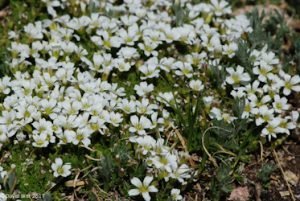 Chapter 3 Part I The Search for Boundaries

Energy can accumulate into useful function or dissipate into purposeless void. Either way it both creates us and is created by us. Overcoming the person/nature split begins with identifying examples of generally true patterns with which we are presented on a daily basis. I recognized them while traveling Highway 93, a dismal route flattening out north of Kingman, Arizona. The road begins with a series of graphic official signs depicting auto collisions. If one does not drive off the road in the reading, these signs carry messages warning of carnage on this stretch of pavement, or perhaps on our life journey. They warn against drunk driving (that action, the temporary anesthetizing of desire), encourage seatbelt use (an approach to the alleviation of suffering), and demand that drivers keep their lights on at all times (right in action, mindfulness, etc.).

This highway is not only the way to Las Vegas. It is also the way back. I spot a man sitting on an abandoned dirt road which is cut short by a barbed wire fence. He is too far from Highway 93 to actively pursue hitchhiking. He is seated on a large mustard green suitcase. He looks off into the barren distance with the same non-revealing expression you can see on any of the slots players from Beatty to Reno to Cripple Creek. Busloads of white, older middle-aged and elderly people travel these roads. Some end up sitting on suitcases outside of Kingman. What weight keeps him sitting on a road to nowhere, robbing him of any desire to go on?

Farther north is the awful grandeur of Hoover Dam. Its dark toilet-drain shaped emergency spillway is frightening, the last plunge of the most magnificent corpse of a lake, the free spirit of a river killed in a head-on collision with concrete. Like the man on the suitcase, this river is stuck, converted instead into hydro-electric energy to power gambling casinos for men with green suitcases to deposit into slot machines, coin by coin, their life savings, their houses, their families, their lives. This deathly chain mimics the natural birth-death-decay-regeneration cycles. Do the dam builders, in their dreams, feel the weight of all that cold dead water?

As I accelerate the car to escape the endless webs of power lines, I see that we are running out of things to conquer. The energy of violence we put into the world (greed, pollution, habitat destruction, overpopulation) distributes itself as instabilities creating the violence we get back (war, famine, pandemic disease). I want to get away from the bleak pattern examples and later, at sunset on another highway in the eastern foothills of the Sierras, I find a sign enticing me to a better place. “Idyllic log cabin resort-on-a-stream, bedroom, kitchen, bath, surrounded by ponderosas.” A half hour and twenty miles out of my way I find its reality: a clapboard hut of one small, smelly dark room with a neglected sink and sagging bed, and attached, barely, a claustrophobic shower stall and stained commode. It is set back ten feet from a highway and is nowhere near water except during rain storms. Outraged by the lie, I speed back on a road winding steeply down through sagebrush and oak.

A deer fawn leaps from the shrubs directly into the path of the car. I see nothing more than a brownish flash of movement but hear a dull thump which sounds like the striking of a large pillow. Heart racing, I keep control of the car even as I shove in the clutch, slam on the breaks and skid through a curve onto the road’s rough gravel shoulder. Without consciousness of the action, I find myself kneeling by the deer, shaking, running my hands over its side. Guts ruptured, neck broken, blood everywhere, an instantaneous death, a horrifying trophy. I wrap my arms around its shoulders and lift, dragging the animal into olive colored sagebrush, hidden from the road as if in an attempt to hide the murder. It has weight, but it is the deer’s warmth that seems heaviest. I apologize to this small once living evidence of energy, movement, position. It grew not much higher than my car bumper before its demise. In its death it will provide sustenance for the energy of other lives although that is little consolation. A shocked doe and its remaining fawn cross the highway. They stare at me and the dead fawn for a long time.

Destitute men slump on green suitcases in the desert. Nihilist engineers defile rivers with dams. Speeding naturalists smash hapless deer on roads to nowhere. Each of the events serves as a question about the person/nature split. How is it that we kill what we love on the shoulders of these highways of life? The weight of each question rises to become truth. There is a weight to mindlessness. We drive like we alone own the place, but deer blood on my clothes suggests otherwise. I am stained with memory of the deer; we are no longer separate.

We imagine the presence of boundaries. This comes from the necessary imposition of physical and mental structures we impose on the continuum of the entirety to make sense of it, but from an individual point of view boundary constructs can also serve as barriers or stops in our understanding, a willful denial of the larger systems of which we are a part. For convenience, we pretend that systems exist outside of time and change, that is, we act as if systems are closed: Marriage must be between a man and woman. God is defined by certain attributes but not others. Preservation of the environment must be balanced against the needs of large businesses. Deer and other objects will stay out of our way. The world we fabricate is different from the actual unfolding of patterns over time. Open systems of the social realm (religious institutions, political parties, businesses, the commitments of two persons to one another) are specific examples of a larger pattern common to all closely aligned collections of interacting agents:

Energy moves through all systems.

An idealized social organization acting in accordance with this pattern finds that energy (information) input is actively sought and allowed to flow freely among its stakeholders resulting in a degree of instability (the necessary font of creativity). As this energy dissipates through the system, new ideas emerge in a non-linear way that is natural but non-predictive. This dissipation can be understood as forms of conversion where new ideas (such as a new method of teaching) or new objects (a larger truck added to the fleet) restructure the system so that it takes a shape, either slightly or radically different than its shape prior to the input of the new energy. Chemist and Nobel Prize laureate Ilya Prigogine recognized the changing forms of systems over time as “dissipative structures.” Open systems, that is, just about everything we know of or come into contact with, exist in a far-from-equilibrium state where the input of energy causes instabilities.

All systems, including astrophysical, chemical, ecological, economic, and political, maintain an inflow and outflow of energy with the environment during the time they survive. Energy movement creates temporary states of dynamic equilibrium the shifting form of internal processes and external relations can leave the system teetering on the brink of not working at all. This is of vital importance, for in any system where an input of energy (nuclear fuels, raw meat, political activism) can push that system to instability and change it to an altered form, amplification of agents within the system can take place. The most spectacular example of this kind of amplicate unfolding is the evolution of sensory abilities of life forms culminating in consciousness. The process of energy moving into and through an open system to change its functioning is what I mean by forms of conversion. The distribution or dissipation of energy always carries consequences.

A change in circumstances, a decision taken, or shift in direction within a system caused by an input of energy (nuclear explosion, arrival of a new species, retirement of a chief executive officer) leads to non-predictable outcomes. This is the process of creative evolution. Decision points are known as bifurcations, events that seem a matter of chance, but are chaotically determined based on probabilities arising from earlier decisions. It is just as true for the universe as a whole as it is for you forgetting to engage the parking brake of a car left on a steep hill. Within a general parameter of chaotic patterns, the released vehicle will take any of several downward courses, the exact one of which cannot be known in advance, although the result can be reconstructed historically with great precision. Limited predictive ability, however, is not equivalent to simply not knowing. A broadly stated generally true pattern such as energy moves through all systems (and more focused ones to follow later) establishes a connection from enfolded potential to unfolded realization. It is often our inability (or unwillingness) to make fundamental connections at a deep level that leads to our confusion over the significant outcome of an event that blindsides us (such as running over a deer while driving too fast). The unfolding is a fractal-like, pattern of endless possibilities. Nature is both vast and connected in its unrevealed potentialities, in its realized specifics, and in our perceptions.

Next essay: Chapter 3 Part II The Search for Boundaries