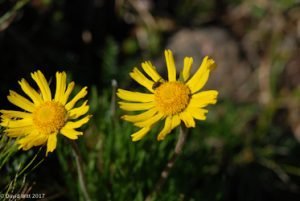 Generally True Patterns: A New Natural History of Recognizing Ourselves as a part of Nature

Revealed (or actual) order is never complete in a non-static universe. Instead, nature is in a state of continual transition, and because of the relatedness of all its components, all that is, is part of a continuum of dynamic processes. Relational thinking suggests this pattern:

All things, events, and processes arise in our perception from somewhere.

Anything that can be actualized references other entities either because of shared history or by means of some contemporaneous action:

A thing becomes a thing following its move from an abstraction to a concrete reality or actual occasion of something.

There are many things (and events and processes) that exist as abstraction which may be realized as a unified thing—an object or thought, for instance. Every realized event—the collision of astral bodies, the flowering of a lily, the discovery of a mathematical theorem, drought, the life cycle of a civilization—is the result of a large process including other realized events, and ultimately of the enfolded order of potentiality.

Examples of revealed, unfolded things, events, and processes may be called actual or specific fact. The generally true pattern (from which specifics arise) of all actions have consequences is an enfolded potential until unfolding as an actual realized occurrence. The initial cause of the generally true pattern itself is unknowable. The manifestation of the pattern as something specific, and thus measurable or knowable on some level, is where we begin to take an interest. For instance, the action of damming a river lowers water temperatures downstream upon release of deep, cold water creating deteriorating conditions for lower river aquatic life. The reason the actions have consequences concept is important is because it demonstrates our connectedness to the larger scope of nature.

All things are interconnected by process, the unfolding of potential into realization. Process can also be understood as change, chance, evolution and history. All realized occurrences (mental or physical events) can be studied as the outcomes of processes and can give insight into those processes through inferences, either inductively (individual instances supporting a general conclusion) or deductively (general observations leading to specific instances). The nature of process is a generally true pattern of paradox:

Realized outcomes of things, events, and processes are both deterministic and unpredictable.

A primary example of deterministic unfolding is the existence of the four fundamental physical forces: gravitation, the electro-magnetic force, the strong force (binding agent of the atomic nucleus), and the weak force (particle decay or radiation). The slightest change in any of these laws would have made life (as we recognize it) impossible, but since these forces came into being as they did, the creation of life and consciousness became inevitable—proven by the fact of our being here. Another way to state this pattern is that a particular process has a particular outcome, but we can’t always know that outcome in advance. All we know is that something we say, write, or act upon will set in motion a process resulting in a particular outcome: A war waged by the United States on Iraq will have a certain outcome, one that cannot be known in advance.

Generally true patterns can also be considered in terms of a third variety of inference, abduction, (coined by Charles S. Peirce) which provisionally assumes that the offered explanation, if shown to be correct, gives clarity to the question under study. He held as well that an idea should be examined in light of its consequences, an idea that informs this study.

Patterns can be understood as relatively simple rules. These, however, can be combined to create complex outcomes of visual form (such as fractals) or behavior (such as the construction abilities of bees and beavers). Installing a set of rules into an ant’s brain to control each fragment of behavior necessary to construct a tunnel and nest system is impossible (not enough capacity in the neural system). The development of philosophy also cannot be precisely genetically coded. But the inborn rules of sensory and symbolic inquiry can be combined in ever changing ways to achieve extraordinary results. The ability to recognize the patterns that connect us to the rest of nature could be an example.

The ability to recognize change itself is inherent to all life, starting with reactions to changes in surrounding chemistry and temperature recognized by even the simplest life forms. Those reactions can be as simple as moving closer to or farther away from stimuli, or evolving into a new form altogether.

All things, events and processes of the entirety change and evolve.

All things are in the process of becoming something else. For us, the altering of conceptualization and consciousness is an example; all states of mind and perception are temporary before the next moment of greater or lesser change. Even the closed system of a rock crystal on the hillside above my house is a temporary state, old rather than eternal. The comprising minerals were once below ground and molten; some day our expanding star will engulf the earth and render its crystals into yet another thing. This means that the motion inherent to all processes is of ever-change:

The processes of reality are always in motion, regardless of time scale.

Another way to put this is that the systems of all things, processes and events have position and velocity. This includes the smallest theorized subatomic particles, rock crystals, Labrador Retrievers, and ideas.

Systems exist in a state of continual non-equilibrium (according to Ervin Laszlo and other theorists) where stability is (sooner or later) overcome by change. The premier example from living systems is when, after eons of time, organisms evolved from simple cell division to genetic recombination through sexual reproduction. The loss of stability led to multitudinous variety.

When living systems such as businesses or sciences or even civilizations accept change as a natural dynamic by working with its forces, they remain open to energy input and thus in line with the evolutionary/creative processes of generally true patterns. Interconnections within or among systems (called process structures by mathematician Erich Jantsch), leads to “self-organization,” or the coming together of that system. The change process (instability) comes about through the movement of energy. If we accept the generally true pattern of All things, events and processes of the entirety change and evolve, then we have we have given acceptance to evolution in our environment and as our environment. Instability within a system can be the cause of unsettledness, but this place of tension is also the font of creativity.

Next essay: Chapter 3 Part I The Search for Boundaries