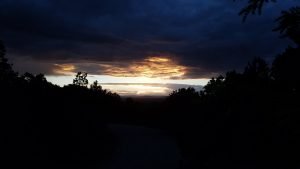 The Intergovernmental Panel on Climate Change (IPCC) has put out a monumental report. Ninety-one authors from 40 countries, plus 133 contributing authors, cited over 6,000 references, creating the Special Report on Global Warming of more than 700 pages in length. The results predict sunset for our civilization.

We have a decade or so to work on changing our anti-environment ways. But maybe we have no time left to gradually change. We must do so immediately in order to reach “net-zero” human-caused carbon dioxide emissions by 2050. Opposing this view, the British scientist Mayer Hill, among others, believe that achieving net-zero by mid-century will come much too late.

Whatever the timeline, every day during which CO2 does not diminish makes achieving net-zero more difficult to achieve. Making this worse is the increasing methane leakage from Artic permafrost, which will almost certainly require us to reach net-zero before 2050. (I experienced alarmingly hot Arctic conditions on my two trips to the far north.)

The IPCC report received scant attention from the major television news networks. The same networks refuse to acknowledge climate change in their hurricane news coverage. One could argue that the impending end of civilization deserved a bit more. But try convincing their commercial sponsors of that. (Parts of the print media have given better coverage to the issue.)

Would it be possible to mobilize against big-Carbon (or if you prefer, mobilize for net-zero) in the way we did for World War II? Back then, our way of life was at stake. Now, it is our lives that are on the line. And if so, who might lead us to net-zero?

The prevailing political conservatism is hostile to anything that might be anti-capitalism and even more so when internationalism is involved. If you believe with President Reagan that government is the problem or with President Trump that globalism is the problem, then pro-environment mobilization by all the world’s governments becomes an impossibility. IPCC is for them just another example of a world government agency run amok.

This is not trivial: the very psychological identity of the conservative is at risk. You can’t admit the existence of global climate change when your entire being is based on an ideology of anti-domestic big government and opposition to international bodies infringing upon national sovereignty.

American liberalism, in its current pro-Corporate incarnation (President Clinton’s contribution), is no less destructive to the environment. Liberal flirtation with identity politics doesn’t help, because “Nature,” as an identity in and off itself does not find a home in that worldview.

Free market capitalism (North America, Western Europe, etc.) and state sponsored capitalism (China, etc.) believe only in resource extraction for economic growth, in contradiction to the laws of biology. Our prosperity comes at the expense of all the other life forms on the planet.

Theological concerns largely center on human-to-God issues without recognizing Nature as a part of the mix.

We all have our political, religious, national, ethnic, gender identities. Have many of us identify first of all with nature itself? Narcissism is triumphant: we won’t/can’t give up our identities even if it kills us.

Modern civilization’s great political philosophers such as John Locke, Edmund Burke, Thomas Paine, and John Stuart Mill did not prepare us for a challenge of this magnitude. Our great naturalist philosophers including Henry David Thoreau, John Muir, and Ernest Thompson Seton demonstrated insight into our relationship with nature, but neither did they prepare us for what to do next in our current situation.

The IPCC report on climate disruption is just the most recent; similar ones show up every few months only to be subsumed into the larger news flow of political scandals, natural disasters, celebrity shenanigans, etc. For their part, IPCC and other scientists suggest technical solutions, but the mindset needed to move us toward a net-zero ideology won’t come from them either.

We are awaiting neither left-wing nor right-wing leaders, not technical or social engineers, but instead, the rise of consciousness-raising moralists. Maybe a Gandhi or King or Mandela for Nature will show up. We need them soon.