My work comes about as a response to the massive, intentional attack by our civilization on oceanic, terrestrial, and atmospheric systems (the Anthropocene era). This destructiveness of habitat and species arises from the belief that we are separate from nature and thus immune to the laws of physics and biology. Generally True Patterns is a philosophical refutation of that mistaken belief. Actually, physical, living and social realms are inherently connected over vast time. The film Ernest Thompson Seton and the Exploration of Canada’s Fabled Aylmer Lake chronicles an Arctic expedition at the dawn of what became 20th century environmentalism. The essays in the Home section are more temporal in spirit, images in words and pictures of the now.

Taken together, these approaches define what I think of as radical natural history, supporting the premise that what we do and how we are in the world really matters to our moral and physical survival. Socrates held that the only life worth living is the examined one. The dictum of the radical naturalist is that the life worth examining is the one in lived in relationship to all other living beings. We must fight to preserve that life in whatever way we can.

Ernest Thompson Seton, The Life and Legacy of an Artist and Conservationist (Salt Lake City: Gibbs Smith, Publisher, April 2010) A biography of the writer/artist/naturalist who co-founded the wildlife conservation and Boy Scout movements; was a pioneer in the sciences of ecology and animal behavior; and explored Arctic and mountain regions in Canada and the U.S. The book accompanied a major exhibition at the New Mexico History Museum (Santa Fe). Excerpt in El Palacio Magazine (2010) and American Art Review (2011). >Ralph Emerson Twitchell Award, Significant Contribution to the Field of History, Historical Society of New Mexico (2011).

Spirit Ascendant: The Art and Life of Patrociño Barela (Santa Fe: Museum of New Mexico Press/Red Crane Books, 1996.) A biography of the first New Mexico artist to be collected by the Museum of Modern Art. Excerpt in New Mexico Magazine (1996) and Artes de Mexico (1997). Accompanied a traveling exhibition at the Harwood Museum and other venues. Co-authored with Edward Gonzales. >Border Regional Library Association Southwest Book Award (1997). 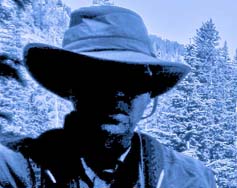