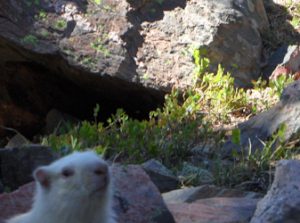 This series on generally true patterns in nature is offered at what may be the concluding moments of our civilization, the “Anthropocene” era. This new geologic and biologic era created by us is marked by the certainty of coming catastrophe unless our behavior changes. Massive oceanic and terrestrial habitat destruction, a nearly unprecedented rate of species extinction, and intentional alternations in the atmospheric and hydrologic forms that nurtured our civilization (and wild nature) are leading to a shift in air composition, water distribution, and a reduction in overall bio-carrying capacity of the living earth (“Gaia”) even as our population spirals out of control. (For more on this check out the Help Nature section of my web site and authors including Naomi Klein.)

The belief that we are separate from nature and thus immune to the laws of physics and biology is demonstratively wrong. Those of us who have identified these issues have a moral obligation to accept the dictum of Socrates that the only life worth living is the examined one. The dictum of the naturalist is that it is not just the individual life, but the life of the planet that we must examine and fight to preserve in whatever way we can.

There is a widely held belief that we are exempt from the laws of nature. And further, that we can treat the living earth without regard to consequences. Our species may endure, but our purposeful environmental destruction threatens the survival of wild nature and the civilization we have built. We need to examine what might remedy or mitigate the situation and address the underlying cause.

Look elsewhere for stories about “solutions” such as solar energy and recycling, reduced meat consumption, anti-corruption efforts, etc. Such fixes are vital outcomes of what I have in mind, but utterly incapable of saving us unless we look deeper.

Understanding nature is of vital, ultimate importance. The sense of unease that many of us feel in our personal, societal and environmental lives comes out of a disconnection from nature. This disconnection can be addressed through identification of what can be summarized as generally true patterns, a recognition that the physical, biological and social realms operate according to common underlying principles.

Patterns demonstrate the endless complexity of nature, but are based on relatively simple rules and once recognized can be applied to the way we live, think and act. Generally true patterns are a model of nature’s architecture. Neither mass nor energy, they encompass both. Building skills in pattern recognition will be of importance to any of us who wish to become more conscious of our place in the world.

Pattern recognition is deep immersion into how the things, events and processes of the entirety are connected. Patterns represent the dynamical spirit of nature in its forms of chance and creativity pushed forward by instability. My purpose is to identify patterns that demonstrate our connection to the natural world, to replace the person/nature split with a person/nature connection. It is for those of us who have decided to take responsibility for decisions made in our personal and public lives. It is for anyone seeking a mutually healing relationship with nature.

This deep level of understanding is essential if the needed technological, ethical, and moral fixes can be put in place in time to make a difference to our survival.

Works on corporate and government corruption, carbon pollution and climate instability, biodiversity and habitat loss have refuted the belief that the laws of laissez faire prevail over the laws of nature, but not everyone has accepted this message. The poisoning of the environment and our bodies has been noted but without appreciable change in the way we actually live. Our disregard of the natural world has not changed.

Warning signs are coming from wild nature. Within a relatively short time major predators such as snow leopards, African lions, and polar bears will likely be gone from the wild. The integrity and carbon sequestering capacity of the Amazonian forests will be compromised beyond repair. Fresh water will become more fought over than oil. The polar air conditioners, required for planetary cooling will wind down dramatically releasing methane deposits currently resident in the frozen tundra, creating a positive feedback loop of climate warming.

Scientific documentation of our bleak future has had no political effect whatsoever, at least not so much as to make much difference in the outcome of our current path. My purpose is to suggest why this might be so. My observation is that our world civilization (its leaders, its individuals) has not been reconciled to nature and has failed to take its actual processes into account. Unless there is a revolution in our thinking (and consciousness) the predicted disasters may well come about. Pattern recognition could convince us that we are a part of and not separate from the rest of nature. Finding accommodation with the natural world will lead to a better future for all living beings.

Generally True Patterns is based on my lifetime study of natural history and is informed by academic and professional work in political science, systems philosophy, and history. In slightly different form it has been published as an eBook. Additional radical natural history essays may be accessed at www.davidlwitt.com.

This series of essays, published twice per week, will explore the structure of nature’s patterns. Each begins with a series of observations concluding with the meanings I draw from those observations, illustrated by the patterns themselves. Acknowledging that we are a part of nature could yet save us from ourselves.

Next essay: Chapter 1 Patterns Part I: Above All Else, Nature Is Characterized by Movement